REVIEWING “THE DISASTER ARTIST”: EXPLORING FRIENDSHIP & THE DARK SIDE OF THE AMERICAN DREAM IN HOLLYWOOD

Posted on December 1, 2020 by jameswriteshislines 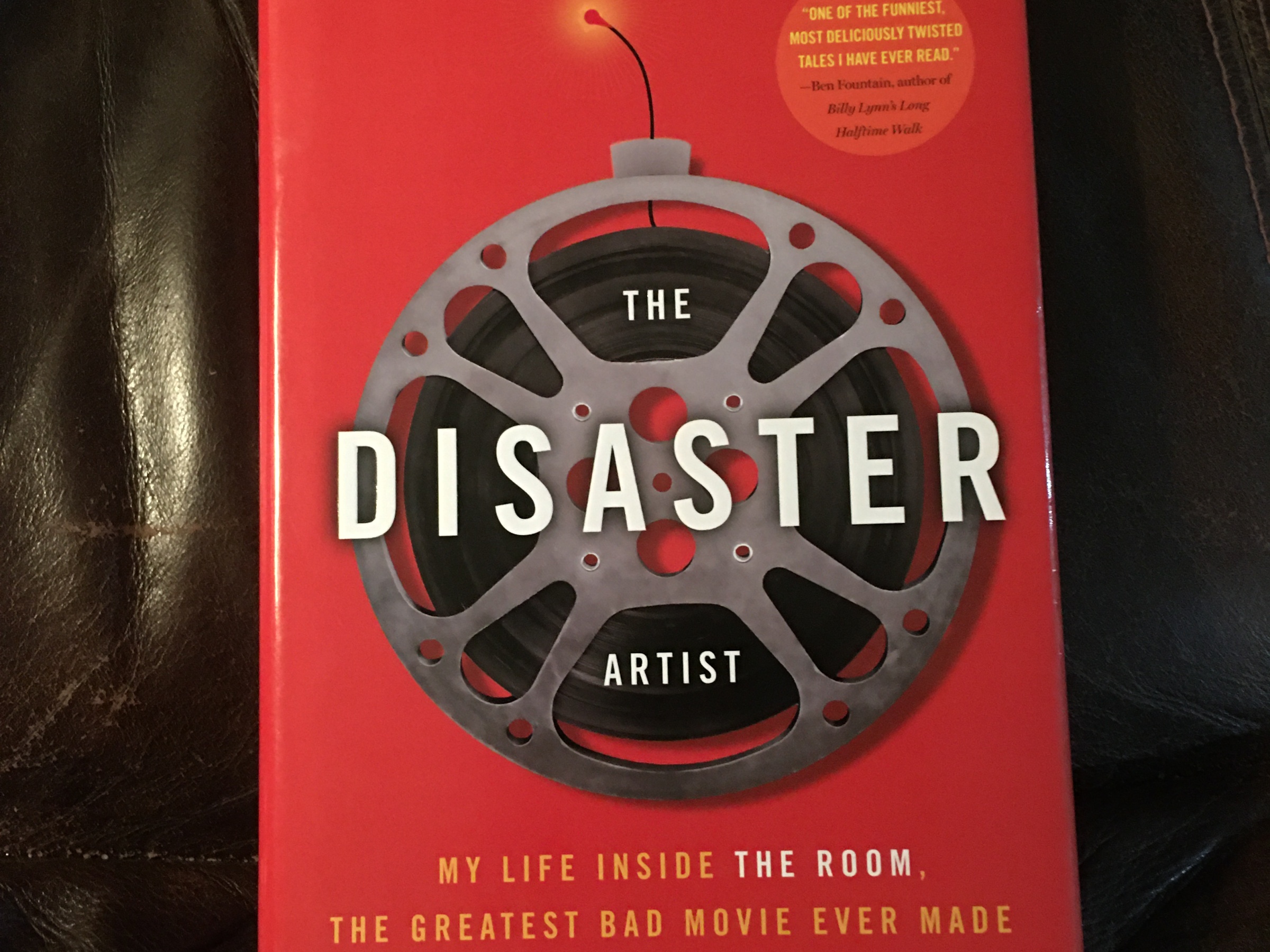 Book Reviewed: The Disaster Artist: My Life Inside The Room, The Greatest Bad Movie Ever Made, by Greg Sestero and Tom Bissell

So here we come to my first book review on James’ Online Book Club, and believe me when I say that this book was certainly one of the strangest books I’ve ever read (in the best way possible). A gift horse with a toothy grin, as well as a forked path going multiple directions, this book was a work of nonfiction but read like a novel that Ken Kesey would have written. It’s also a book I’ve read multiple times; its subject is a film I’ve watched no less than seven times, and was itself adapted into a film starring James and Dave Franco.

That book is The Disaster Artist, and it was written by Greg Sestero (along with Tom Bissell). It is a chronicling of the making of The Room, probably the oddest cult movie to come out of any decade, much less the earlier 2000’s. But it’s so much more than that—this is the story of two friends, two souls who couldn’t be more different, and how one’s ambition serves to color the other’s dreams. Here’s the story of that book, and oh, what a story Mark!

The book, whose full title is The Disaster Artist: My Life Inside The Room, The Greatest Bad Movie Ever Made, is hard to categorize, at least for this reviewer. I actually sought to place the book on the shelf at home after I finished reading it for the first time, but I came to a bit of a problem with this. Where in the world does it go? The back cover lists the genre as Pop Culture/Memoir, but the jacket copy says that it also reads like a novel. So is it a piece of reportage? Is it an autobiography? Or did Greg seek to channel Capote and bring the nonfiction novel to the Hollywood scene? Plus one of its subjects is the making of a film, so the book would just as easily fit with my film books and screenplays as it would among my general nonfiction collection. At the end of the day I shelved it along with my other memoirs and autobiographies, and I left it at that.

But we’re not here to talk about how I organize my personal library back home. We are here to talk about Greg’s story, and it’s a story of a dream that quickly turns into a nightmare…and then comes back around and finds for itself sort of happy ending (with a major caveat). I will be discussing that story at length, as well as going over my thoughts of the film adaptation. It is my hope to dissect the book in as thorough a fashion as possible, and while I will attempt to be as free of spoilers as possible I still can’t help but go over major points brought out in the book. Also there’s the fact that the book has been around since 2013; the movie based on the book came out at the end of 2018. There’s been plenty of time for people reading this to have already the book, so I cannot be completely blamed for any spoilers that come (he said mostly in jest).

The book chronicles Greg’s growing relationship with the mysterious Tommy Wiseau, a man whose origins, age, and seemingly endless wealth were all as carefully guarded as the secrets housed behind White House doors. This perfect “odd couple” builds a sort of symbiotic life that is totally dependent on each other, and it is that combined life that is the crux of the whole book.

The story opens on Greg, who was at the time 19 and seeking validation for his dream of becoming an actor, as he decides to take a class somewhere in San Francisco. It is in that class where he first sees Tommy get on stage and proceed to put on this butchered, completely out there Shakespearean sonnet whilst sitting on a foldout chair facing backwards. Everybody in that class was completely gob smacked by this strange man—never before has there been such an unorthodox performer. He was marked by a number of things: his hair, long and a shade of black that can only come from a bottle; his voice, characterized by an accent no one can place; a square and slightly misshapen face not unlike one of Lon Chaney’s characters.

As far as beginning actors go, this guy was off the wall. Greg knew that he just had to do a scene with Tommy. That night after class he went up and introduced himself.

From that meeting a friendship blossoms between the two. Greg, not yet in his twenties and fighting continually with his mother over the stifling of his dreams, finds himself fascinated by Tommy’s shyly extroverted persona. They eventually take a nighttime drive up to the spot where James Dean died in a horrific car accident; it is on this trip where Tommy makes the offer for Greg to live in his Hollywood apartment and make actual steps toward becoming an actor. Greg is blown away by such an offer.

Over time the cracks begin to crumble. Greg finds himself unable to reconcile things; Tommy, meanwhile, remains hidden behind a shifting wall of secrets and lies. In time the elder Tommy shows increasing signs of paranoia, self-delusion and jealousy; by the time we get to the part where Tommy writes his first script and prepares to make his own movie, Greg is ready to find his own place and move on with his own life. It isn’t until Greg digs deeper into the mysteries that he begins to soften on the conflicting feelings he has concerning his friend. By this point he is plugged completely into Tommy’s Planet, and he has no choice but to join in on the production of Tommy’s opus, The Room.

The book alternates between this troubled friendship and the tumultuous production of The Room, and each chapter has for its heading a line from the film. The structure itself is interesting, but the way that Greg filters the story through two classic films is just as interesting. We regularly see quotes from Sunset Boulevard, which seems to mirror The Disaster Artist in its cynical breakdown of the Hollywood dream; the words of Tom Ripley go on to haunt the reader (Greg sees The Talented Mr. Ripley as an analogy for his own friendship to Tommy; showing the film to Tommy has the side effect of inspiring Tommy to make his own movie).

It is the chapters discussing the production of The Room that’s difficult to read in places, and that is in large part due to the actions of Tommy Wiseau. Yes, it is quite funny to read about a man who will spend millions of dollars buying digital and traditional film equipment (standard practice is to rent the equipment), only to turn around and skimp out on wardrobe and set design costs); but then there are scenes depicting acts which aren’t anywhere near as endearing or funny. Tommy exhibited controlling and manipulating behavior before in his friendship to Greg, but on set he pushes these traits to the extreme. Between hurling homophobic insults at a young DP who quits in the middle of production (he’s the second DP to quit production), and the almost predatory way in which Tommy swoops in on Juliette Daniel during the filming of their love scenes, I was left feeling really unsettled in places. Whereas in the regular sections of the book I was still sort of rooting for Tommy, I found myself wanting to kick him in the shins in frustration at other times; I could feel that Greg had wanted to do something like that as well, or maybe even something worse.

And what makes it even more unsettling is the fact that I realize that Tommy can be better than what he is. He doesn’t have to suffer at the hands of his own worst impulses—Tommy can lean into the better part of his idiosyncrasies, and become a cult figure for the best reasons. In a way Tommy represents all of us, in that he shows us that unconditional belief in one’s own farfetched dreams can be as much a curse as it is a gift.

The Room came out in 2003. The production cost somewhere between 6 and 10 million dollars; it went on to gross $1,800 during its initial two-week run. And yet somehow through word of mouth people started trickling in to see this weird thing, this earnest attempt at making a drama that instead turned into a screwy comedy. Nearly two decades later and we have a cult phenomenon. As Tommy would say, “Only in America.”

By the end of the story, when we reach the world premiere of the film, we come to the grand realization moment for Greg. He sees Tommy sitting there, soaking in on all the contradictory glory that is his vision, and he pours over everything he’s had to deal with up to this point: in that moment all the trouble that occurred between them just melted away, and he was left with nothing but the love and admiration that was there at the beginning of their friendship.

I could go on and on about this book, just like I could go on and on about the film adaptation starring The Franco Brothers (the film was charmingly watchable, but barely scratched the surface of the story, and what was with James’ stiff imitation of Tommy’s accent?). My parents seem not to understand my obsession with this story, and maybe they are correct to assume that I suffer from a mild case of myopia. All I can say is I enjoyed this book, and I will continue to enjoy this book in future readings. I cannot recommend it highly enough, even though I have trouble finding the right place to put it on my shelf. I will tell others about this book as well, just like I’m telling you—I’ll preach up and down Guerrero Street about the merits of the book. And if you want to know the significance of that particular address, well, I suggest you go to your local library or bookstore and pick up a copy to find out for yourself.

← On Reading: Stephen King
REVIEWING THE OUTSIDERS: FRIENDS & FAMILY AMID GANG FIGHTS AND THE ETERNAL STRUGGLE OF CLASS WARFARE →